Looking for the best pho restaurants in Hanoi’s Old Quarter? Take a look at the 8 best pho dishes in Hanoi to make sure you don’t miss the best bowl of pho.

There is no better location to eat pho than in Hanoi, where it was first created. Although pho may be found all across Hanoi, the Old Quarter is where it is most well-known. The fragrant aroma of star anise and cinnamon steeped in cow bone broth wafts through the air, guiding you through every turn and alley. If you’re looking for the top 8 pho spots in Hanoi’s Old Quarter, don’t miss this post.

It is hard for Hanoi residents to avoid mentioning Pho 10 Ly Quoc Su when asked which pho they enjoy eating. This restaurant currently has three locations in Hanoi due to the demand for the excellence of the pho. The original site down Ly Quoc Su street, close to Hoan Kiem Lake and St. Joseph’s Church, is still the greatest. 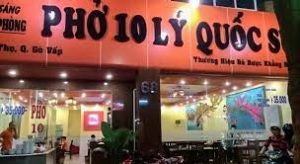 The pho bowls here are meticulously constructed, as usual. Perfect noodles and soft beef are served in a subtle broth with no flavor dominating the others. There are six distinct varieties of pho available here, all made with beef and served in various ways according to on personal choice. Want to consume pho the way Hanoians do? Don’t forget to bring some waffles to munch with the vermicelli and dip into the broth.

The service is swift in addition to the excellent pho. Behind the glass doors, you can observe the pho chefs as they quickly and accurately produce their meals. Since Pho 10 Ly Quoc Su is the most well-liked restaurant in Hanoi, it should come as no surprise that it is ranked first.

Even though it closes at dusk and you must sit on the pavement on little plastic chairs, this spot is well-liked by young Hanoians. You have the option of regular pho, chicken pho (chicken noodle soup), or dry pho, all of which are equally as good as they are wonderful. At least once, eat here before moving on to the remainder of Hanoi’s nightlife.
Each bowl of chicken noodle soup in Pho Hanh has a substantial amount of meat. Along with its well-known dry chicken noodle soup, Pho Hanh is known for its famous chicken feet salad, which is a residents’ favorite.

Although beef is typically used to prepare pho, you may also order pho made with chicken here. The largest chicken pho is served at this restaurant. Operating for more than 40 years is Pho Ga Lam. Lam, a seasoned lady, is the restaurant’s proprietor.
The quality of the shredded chicken at Pho Lam is renowned. With a few stalks of lemon leaf garnish, the chicken’s golden skin is delicate, aromatic, and flavorful. The chicken noodle soup made by Pho Lam is finished. Big and soft noodles are available. The chicken is soft, boneless, crispy, and with distinctive red chili vinegar; the broth is sweet and juicy.

Even though it is well-known, the cost is still reasonable at 40,000 VND for a special bowl. Previously only available in the morning, Pho Lam is now offered all day. Many patrons admitted that Mrs. Lam’s business is the only place to find great pho. Perhaps the humanistic motif of the pho restaurant helps patrons assess the actual “Hanoi taste.” 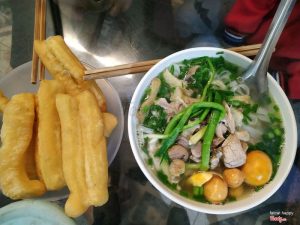 Like the well-known pho eateries in Hanoi, Pho Suong has a devoted following of patrons and has been in business for a while. “Suong” in Vietnamese means “satisfied”. The restaurant’s name, according to the proprietor, was intended to pique intrigue. It also describes the level of fulfillment they want their clients to have after consuming their noodles.
The distinct Northern flavor of Pho Suong is well-known. The pho served here is incredible; it has a clear broth, noodles, herbs, veggies, and tender meat. In addition, among all the pho restaurants featured in this article, Pho Suong boasts the most exquisite decoration.

You can tell you’re getting delicious pho when a traditional Vietnamese restaurant has folks lined up outside while it’s crowded inside. Such a restaurant is Pho Bat Dan. You must wait in line to get a table at Pho Bat Dan because it is self-service. Being patient will pay off with one of Hanoi’s most genuine bowls of beef pho. 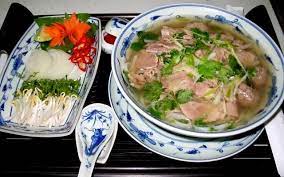 Since opening in the 1960s, this pho restaurant has always served the same dishes. Because of its classic flavor, Hanoians appreciate a bowl of pho here. The soup has a beautiful blending of many flavors and is transparent and thick. Additionally, the beef is extremely delicate and has a vivid pink hue. For instance, they don’t provide lime with the soup like other Hanoi pho establishments. They believe it is because the soup is overly flavorful; nonetheless, they could not be more correct.

In summary, in Hanoi, pho is so well-known that it is nearly always available. Even if there are three or four restaurants on several streets, ranging from opulent to pastoral and hidden in the alleyways, only those in the Hanoi Old Quarter can satisfy the exacting standards of Hanoi eaters. The above article has suggested the 5 best pho restaurants in Hanoi’s old quarter, you should visit if you want to eat delicious pho in Hanoi.

The Best Food After Teeth Whitening You Should Know

The Best Food After Teeth Whitening You Should Know