In the UK and Ireland, a special variant of the blood sausage known as black pudding is regionally produced. The main ingredients in a Blood Pudding recipe are pork, beef or lard, and a grain, usually oats, barley, or oatmeal. The high percentage of grains, along with the addition of additional herbs such as pennyroyal, help create a black pudding that is different from the blood sausage eaten in other parts of the world.

Blood puddings are frequently regarded as one of the earliest varieties of sausage. Animals are typically bled at the time of slaughter, and since blood can not preserve itself unless it is treated in some manner, one of the greatest methods to save wastage is to turn it into pudding. the majority of contemporary black pudding recipes incorporate.

It was used in a 15th-century English recipe for a dessert that was only consumed by the nobles. In almost all of the traditional UK Blood Pudding Recipe, the fresh blood is stirred, fat and some kind of rusk are added, and seasoning is added before the mixture is filled into a casing and boiled.

While traditional cattle intestine casings have been utilized in the past, modern commercially produced puddings are often prepared from imported dried blood and employ synthetic cellulose skins.

However, its history and form make you think it is difficult to make it at home. However, in this post, Amthucdatviet.com will bring you the Blood Pudding Recipe, including the ingredients and how to cook this dish that is extremely easy to make right in your kitchen. Let’s get started!

What Is Blood Pudding? 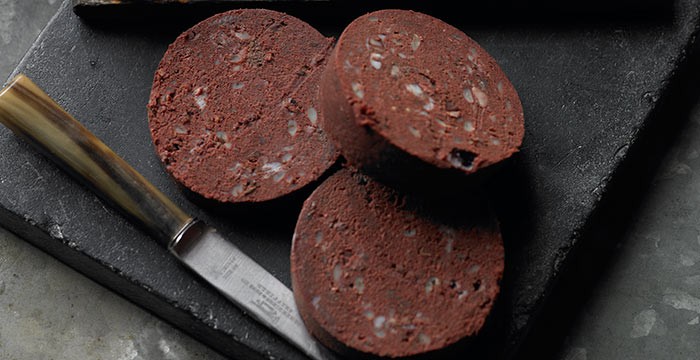 This meal was significant to many farmers in Europe, especially during medieval times as even reasonably impoverished families frequently kept at least a pig.

To prevent any portion of the animal from going to waste, it was standard practice, if the not vital procedure, to make blood pudding.

It gives the entire nose-to-tail issue a completely new perspective, am I right? Today’s society doesn’t consume as much offal as it formerly did. Blood, as well as organs including the heart, sweetbread, liver, and kidney, aren’t used as frequently as they formerly were.

Blood was traditionally mixed with chopped hard-boiled egg yolks, pine nuts, minced onions, and leeks before being inserted into lengths of the intestine in Apicius.

During the Middle Ages, peasant farmers would mix pigs’ blood with chopped onions, diced swine fat (or suet), and spices like cloves and ginger, then pack the mixture into lengths of the intestine.

In the modern world, it can be risky but not impossible to pack casings mostly with blood and certain seasonings. Fortunately, blood sausage made nowadays is often thickened with a grain (oats or barley) and fat.

I know… You’re undoubtedly cringing if you’ve read this far. Thinking of blood as a component is different. However, blood is a common element in most cultures’ foods.

Additionally, the blood contains a lot of nutrients, including minerals and iron. In fact, a lot of people view black pudding as a superfood.

Blood pudding is undoubtedly healthy and tasty since it isn’t produced like typical sausage, which needs a lot of salt to cure.

It takes an hour to prepare and cook everything. This Blood pudding recipe may provide at least 4 servings. 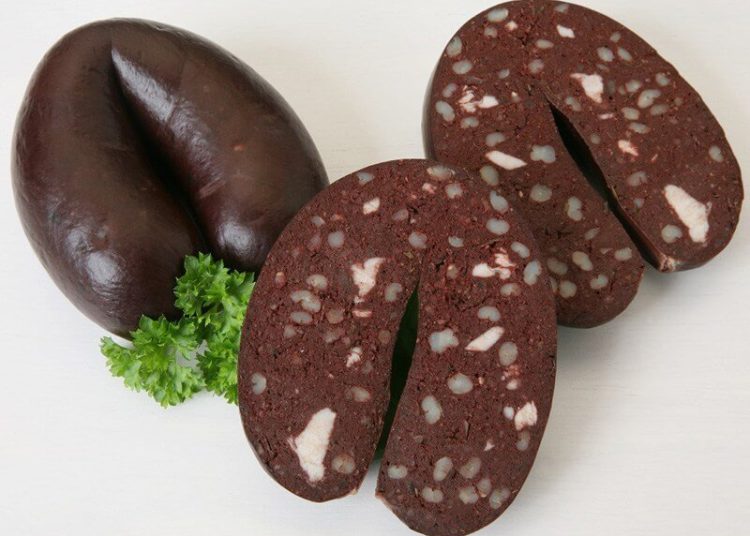 Prepare The Ingredients For The Blood Pudding Recipe: Let’s Go!!!

Step 1: Cook barley with water for about 75 minutes then remove the water and let the barley cool.

Step 2: Fry the diced onion over low heat and then let it cool.

Step 3: Mix blood and a little water (you can use a whisk to save time) then filter the mixture through a sieve to remove dirt and get a smooth mixture.

Step 4: Put all the prepared ingredients and spices into the blood mixture and mix well.

Step 6: Grease a long baking pan and preheat the oven to 175 degrees C. Make sure everything is well balanced in a large dish before placing the pork intestines in the oven.

Step 7: Pour the mixture over the baking pan to ensure that all the solids are evenly distributed. 45 minutes to bake. The black pudding is finished when the skewers become clear.

Step 8: Put it back in the oven and keep checking every 5 minutes if it’s still not done after 45 minutes.

Step 9. Take it out of the oven, then allow it cool to room temperature. Cut it into small circles and bake on the pan until it becomes dry and slightly crispy.

You’d think it was like blood, but it’s not. You may not even realize it if you don’t know that there is blood. Blood pudding has a texture like a sausage, has a long, round cylinder, and a smooth inner surface. However, it is tougher than regular sausage, but this is one of the things that makes this dish attractive.

In terms of taste, it has the fleshy taste of blood mixed with oats, the pungent and pungent taste of onions and pepper but is very pleasant, bringing out the flavor of the dish. You will also feel the fat of the lard.

It is suitable as a snack during drinking sessions or served as a side dish in a meal.

How To Enjoy Blood Pudding 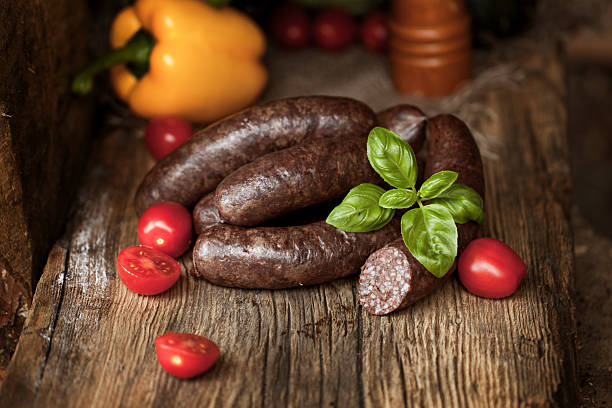 You created the perfect Blood Pudding according to the Blood Pudding Recipe, right? So how to enjoy this dish to be able to achieve the most perfect feeling?

In the Blood Pudding Recipe when you finish making it, you can completely eat it directly to feel the original taste.

The blood Pudding Recipe can also be served with vegetables as a roll, or with soups, curries, and hotpots. Especially if you love Vietnamese cuisine, you can easily find Blood Pudding as an accompaniment to popular noodle dishes from Vietnamese such as Bun Dau Mam Shrimp, Bun Cha,… Combine Blood Pudding with eggs for breakfast.

There are many ways to enjoy this dish, you can eat it any meal of the day such as breakfast, lunch, dinner, and dinner. It can be eaten as a snack and snack in drinking parties with friends.

You can prepare it in many forms such as fried, sautéed, steamed, grilled,… all of them are very delicious and give you many special taste experiences.

Blood Pudding is a delicious and popular dish in many parts of the world. It may serve as both a side dish and a main course.. Besides, it is very easy to prepare and make many different dishes. However, enjoying foods made from animal blood can make you feel more secure when making your own at home. Our Blood Pudding Recipe makes preparing this dish easy in the comfort of your own home. Add daily dishes to your family’s meals. See you in other interesting articles and check out our other useful articles.