Fast Food In Vietnam (Do You Know About It)

by AnhKhue
in Foods & Drinks
0

Fast food is a symbol of the frenetic pace of contemporary life. Fast food is almost always chosen by consumers because of its quickness and convenience. In addition, some famous fast food establishments have their own secret recipes to create unique, irresistible flavors. And in countries, a lot of people eat fast food because it’s fun rather than because it’s convenient.

So does Vietnam have fast food? Many tourists often have this question when thinking about Vietnam. Everyone knows that Vietnam is a culinary paradise, and the traditional dishes of Vietnam are countless. Therefore, in this article, Amthucdatviet.com will answer your questions and introduce you to fast food in Vietnam.

Facts About Fast Food In Vietnam

The fast food industry is really booming all over the world. With a population of more than 90 million people, Vietnam is a potential market for fast food businesses. Although more than a dozen fast food chains have entered Vietnam and grown there for more than ten years, the size of the industry is still much smaller than businesses anticipated. However, contrary to some unsupported claims of someone who has never been to Vietnam that “the fast food industry cannot thrive in Vietnam because the Vietnamese are too poor to pay for a meal.” in a fast food restaurant”, you can easily discover the following real reasons for visiting Vietnam:

Fact 1: Vietnamese food is faster than the word “fast” of fast food.

You will be surprised by how quickly a street vendor can prepare dishes for guests when going on a culinary discovery tour of Vietnam. Just two minutes after ordering, you can have a big bowl of steaming pho, and five minutes later, you can enjoy a crispy baguette stuffed with grilled meat, coriander, cucumber, and spices. These extremely quick services can easily surpass quick service, which is the secret to fast food success.

To sample all the Vietnamese street food across the country can take months. From the famous Pho, Banh Mi, and Bun Bo Hue to popular street foods like avocado ice cream, rice sandwiches, Cao Lau, and grilled pork skewers with passion fruit, there’s something for everyone. Vietnam is definitely a foodie’s delight. Vietnamese cuisine can satisfy your palate from breakfast to dinner, and if you like, you can have different dishes for each meal.

Although there are no fast food restaurants open 24 hours a day in Vietnam, the country is famous for its nightlife stalls lining the streets when all restaurants are closed. Burgers and fried chicken are not common Vietnamese breakfast or late-night foods. Vietnamese people often travel by motorbike, so it is much easier to stop at a roadside restaurant to buy some hot food. This is another factor that makes Vietnamese street food more practical.

Compared to the cost of fast food establishments, Vietnamese street food is also considerably cheaper. For less than $2, you can easily buy a delicious bowl of Bun Bo Hue. while being able to spend as little as $5 on a Big Mac.

Fact 4: Fast food only gets excitement from children.

Because they have lived their whole lives eating Vietnamese food, elderly Vietnamese are rarely spotted in fast food establishments. However, because they have a really nice and special taste, completely different from the normal meals that children eat every day, children are the biggest admirers of fried chicken, pizza, hamburgers, and potatoes. fries. Another factor is that fast food chains regularly launch advertising campaigns aimed at children. How can a small child ignore the cuteness of the Jollibee mascot or the friendliness of McDonald’s clowns? Vietnamese parents often take their children to their favorite fast food restaurant as a reward for excellent grades or significant parental support.

Where To Eat Fast Food In Vietnam?

Almost all fast food establishments can be found in cities, such as in malls, on key streets, and in popular tourist spots… In a metropolis As large as Hanoi, Ho Chi Minh City, Da Nang, or Hai Phong, it will be much simpler to find a fast food restaurant than in smaller provinces and cities. Here are the most famous fast food companies that have been doing business in Vietnam. 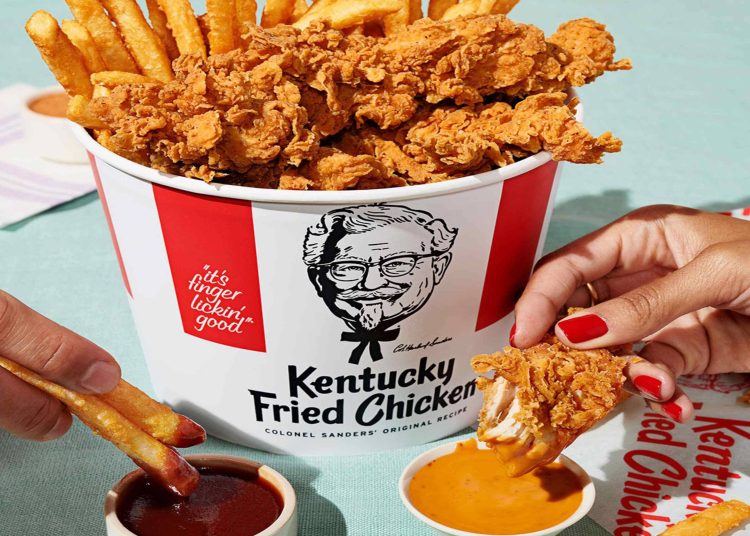 KFC, short for Kentucky Fired Chicken, is a global fast food chain with locations in 109 countries and territories. There are more than 20,000 restaurants there, and every day, 12 million people are served. KFC has 140 locations in 21 provinces in Vietnam. The real American recipe used in KFC’s delicious traditional fried chicken has earned it worldwide acclaim and it’s also the most popular fast food in Vietnam. The recipe of 11 herbs and spices that KFC uses to prepare their chicken holds the key to their world-famous chicken dish. The business not only attracts customers with attractive fried chicken but also regularly changes the taste of hamburgers so that they do not go stale.

This is a Korean fast food chain that owns the secret to making fried chicken meals that are loved by diners. Due to the popularity of the Korean cultural wave and although entering the Vietnamese market much later than KFC, Lotteria’s fried chicken brand has grown rapidly. This is the main competitor of KFC.

Lotteria currently controls a chain of more than 200 restaurants spread across 30 provinces and cities across the country. To match the local taste, Lotteria has added rice dishes to their fast food in Vietnam. The meal of burgers, chicken, and rice can now be divided into three categories on the Vietnamese menu. The burgers are skippable, the chicken has an Asian flair, and the rice has beef.

McDonald’s is the largest fast food brand in the world. Currently, there are 23 McDonald’s stores in the two largest cities of Vietnam, Ho Chi Minh and Hanoi. McDonald’s Vietnam strives to uphold the global standards set by McDonald’s for fast food in Vietnam and around the world: excellent food, first-class service, a pleasant environment, and value for money. let go.

Understanding the needs of modern Vietnamese consumers, McDonald’s provides quick, hygienic, and nutritious meals combined with polite service. Chicken McNuggets, Egg McMuffins, and Big Mac hamburgers are some of McDonald’s most famous fast foods in Vietnam and around the world.

Among the best foods are burgers, fries, and fried chicken. Desserts most chosen by customers include ice cream, crepes, and peach mango cake. Jollibee not only offers consumers the fastest prices, and the highest quality food at affordable prices but also a cozy, classy environment. Chicken with sweet and sour sauce is a highly appreciated fast food in Vietnam.

Popeyes, the US global fried chicken fast food restaurant chain, was established in 1972. Popeyes is loved by many Vietnamese diners when doing fast food business in Vietnam. Popeyes serves lightly spicy fried chicken, shredded chicken, seafood, and specials like red beans and rice. Currently, it can be found in the provinces of Hanoi, Ho Chi Minh City, Kien Giang, and Hai Phong of Vietnam.

Although made from industrial chicken, Vietnamese cuisine prefers chicken with soft meat, crispy outside, not too much flour, and fragrant (popular fast food in Vietnam). In addition, Popeyes also sells a special type of fried called Cajun Fries. Although they look like french fries, the unique seasoning gives them their distinctive Cajun flavor. 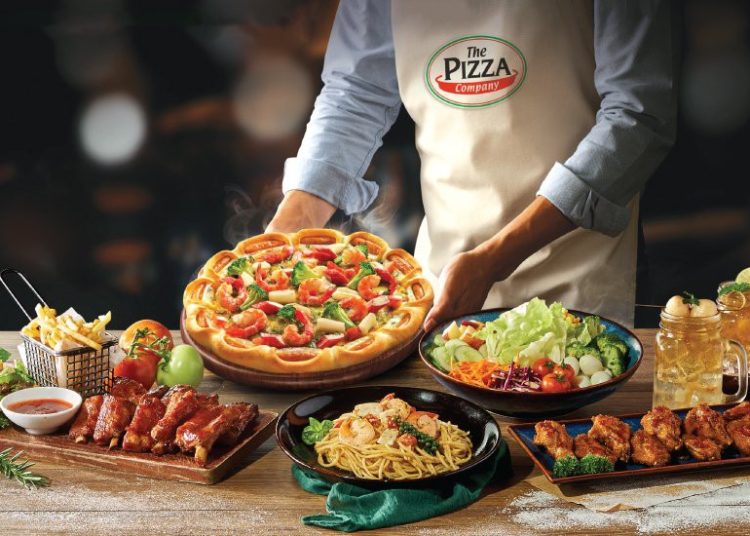 The Minor Food Group, one of Asia’s leading companies in the fine dining and hospitality sectors, is the owner of The Pizza Company. Since its founding in 2001, it has grown to include more than 500 locations worldwide. The Pizza Company opened its first location in Vietnam in 2013 and now there are more than 50 locations selling fast food in Vietnam. The Pizza Company is famous for its delicious Seafood Pizza, featuring a chewy topping, the company’s most filling, high-quality mozzarella cheese, and a delicate flavor that is especially well-suited to Vietnamese diners.

The largest and most famous pizza chain in the world is Pizza Hut. Pizza Hut is pleased to announce its launch in 100 countries in April 2016. Pizza Hut Vietnam was established in 2006 and has grown to more than 50 locations nationwide. In Vietnam, there are many Pizza Hut locations spread across many provinces (popular fast food in Vietnam).

The second largest fast food hamburger chain in the world is called Burger King. More than 11 million people travel the world to dine at Burger King restaurants every day. With the opening of the first restaurant at Tan Son Nhat airport, this restaurant entered Vietnam in 2011. Hanoi, Ho Chi Minh City, Da Nang, Khanh Hoa and Kien Giang are the five provinces of Vietnam. . The Hamburger Whopper is a Burger King staple. What makes Burger King famous is its iconic hamburger, which is made with grilled meat imported from Australia, tomatoes, salad, onions, and soft bread. The hamburger was great and worth the money even though it seemed smaller than other brands’ buns.

One of the largest pizza companies in the world is Domino. With more than 10,000 locations in 74 countries, it serves more than 1 million satisfied customers every day and sells more than 400 million pizzas annually. Fast food in Vietnam from Domino’s Pizza is always delicious, hot, and crispy and will be available within 30 minutes of ordering. You’ll get a free pizza voucher for your next order if the delivery takes longer than 30 minutes! Hanoi, Ho Chi Minh City, Hai Phong, Binh Duong, and Dong Nai are the five provinces in Vietnam that sell Domino’s Pizza.

Fast food in Vietnam will probably not be able to thrive as in other countries due to many factors. But this is still a good market for the fast food business. You should not be too worried about not being able to enjoy the great flavors brought by fast food in this country because you can easily find a fast food restaurant on busy streets in Vietnam.

Popular Vietnamese Bread: Top 10 Banh My You Should Try

Popular Vietnamese Bread: Top 10 Banh My You Should Try