by AnhKhue
in Local Cuisine
0

What makes the diversity and greatness of Vietnamese food culture? Vietnam has historically been colonized and influenced by many empires and countries, but the traditional and famous dishes of Vietnam still retain their own characteristics, down to the way of decoration. Vietnamese cuisine stands out from other cuisines in many different aspects.

Although it is difficult to fully express the depth and creativity of Vietnamese culinary culture in one article, examining these 10 different aspects can help you understand why Vietnamese food culture is so loved. liked all over the world.

Vietnam is an agricultural country, the wet rice civilization has had a long-standing influence on Vietnamese food culture. The life of Vietnamese people mainly revolves around rice. The Vietnamese have been creating an abundant food source, creating favorable conditions for the innovation of Vietnamese cuisine besides being located in South Asia with suitable natural, climatic and geographical factors. fit.

Vietnam has seen a number of wars and protracted occupations as it was being built and developed, especially the 1000-year Chinese and French colonial occupation. Therefore, Vietnamese culinary culture is affected and becomes more diverse.

Chinese cuisine has had some influence on Vietnamese food culture as it has grown and expanded, but it has also retained its own iconic features of Vietnam itself. French colonization played an important role in the diversity of Vietnamese cuisine.

Vietnamese food is considered to be one of the healthiest foods globally. Fresh ingredients are central, with a small amount of fat or oil added to enhance flavor. Fewer combinations are used to ensure the correct amount of seasoning in each handcrafted dish, while herbs and spices are carefully selected for maximum flavor.

It is impossible not to discuss Vietnamese food culture without discussing the use of dipping sauce. The rich, savory dipping sauces that form the basis of Vietnamese cuisine are also frequently used by chefs for garnish.

A thick condiment called fish sauce is used in most Vietnamese dishes. It is used in grilled pork meals or seasoned in pho. It is also commonly used as a soup and stew.

Another ingredient in Vietnamese dishes that deserves attention is soy sauce. Soy sauce is often used in vegetable recipes and stands out for its delicious umami flavor and saltiness.

Another signature element is the chili sauce. It gives some soups or vegetable broths a wonderful lightness in addition to giving them a nice bright red color.

To sauté and marinate meats, shrimp paste is a mixture of shrimp and salt. 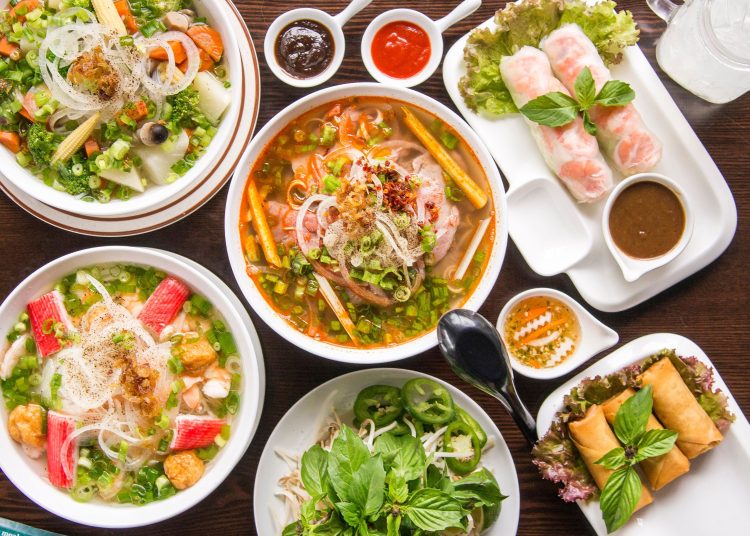 Vietnamese culinary culture is low in fat, gluten-free, and supplemented with many essential vitamins and minerals to help lose weight, strengthen the immune system, and provide the body with the necessary energy.

Vietnamese food culture often consists of fresh fruit or vegetables combined with a variety of spices and herbs, helping to reduce the calorie and fat content significantly compared to typical dishes that may contain a lot of milk, oil, or carbohydrates.

Most authentic Vietnamese dishes, sauces, and dressings that you will find in restaurants are quite low in fat and calories. Even a giant bowl of Vietnamese pho (“Pho”) has only 300 to 600 calories and less than 3 grams of fat per serving, so it’s not particularly high in calories.

Vietnamese food culture combines different ingredients to produce a distinctive flavor. Despite the low cost of many of the components, the careful and well-balanced preparation and flavor of these meals reveal the years of effort that have gone into them.

Using fresh and local products to cut costs and prevent waste developed in Vietnam as a result of the country’s protracted periods of war and political strife. Every component of an animal that was purchased was utilized in some capacity. Vietnamese food is renowned for the way that inexpensive, basic ingredients can be combined to produce dishes with amazing flavors, not for its high-quality meat cuts and pricey organic fruits and vegetables.

The idea of opposites and balance, or yin and yang, is one of the most intriguing aspects of Vietnamese food. The five fundamental elements of Vietnamese food culture are wood, fire, earth, water, and metal. The five flavor elements of sour, bitter, spicy, sweet, and salty are corresponding to these elements. Each of these flavors is present in every meal, and they all work to balance one another.

In terms of contrasts in food, we frequently consider hues, textures, and temperatures. When it comes to Vietnamese cuisine, different food items within the same category (like various cuts of beef) might be categorized as either hot or cold. Food is categorized as hot, cold, warm, or cool in a meal. There must be a counterbalancing dish that is “cool” or “cold” for every food that is seen as “hot.”

Picking up food with chopsticks is a skill; doing it well and not letting the food fall out requires skilled technique. You will not be able to understand the Vietnamese eating culture without using chopsticks. Vietnamese people almost never use forks to skewer food like Westerners; instead, they use chopsticks in every family meal, including BBQ parties.

Chopsticks are used to move meat, fish, or other foods from the shared plate to the small fish sauce bowl and finally your bowl. It’s completely okay to use chopsticks to scoop rice into your mouth while holding the bowl almost touching your lips. This way, food can’t accidentally fall out while eating.

7. Using Food On The Tray

A Vietnamese dinner consists of many different dishes served at the same time on a tray. Every day, the whole family will have dinner together. Vietnamese dinner is usually served without dishes. Each participant will have a bowl of rice, but they will share other foods, soup, and fish sauce. During their meals, Vietnamese eat with chopsticks and porcelain spoons.

Vietnamese people rarely eat by themselves and like to eat in groups. In the majority of traditional Vietnamese restaurants, you will be seated at a table with numerous dishes arranged in the middle. Everyone at the table is entitled to the food in the center, so feel free to assist yourself to your fair amount and fill your plate as necessary.

Vietnamese culture is firmly rooted in the rivers, rice fields, mountains, and clear blue waters of the country. As a result, leaving food on the table is rude, especially when we are in someone else’s home and they have prepared meals for us.

9. Good Mix Of Ingredients And Spices 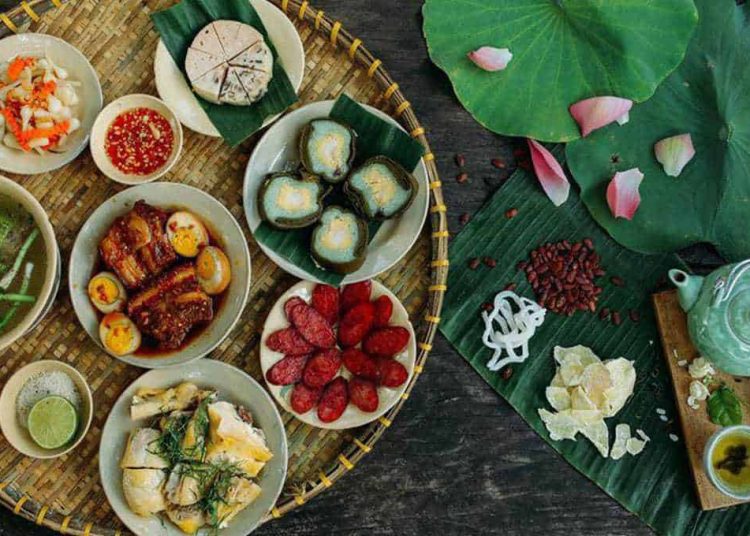 The typical ingredients in Vietnamese food culture are rice, beans, veggies, pork, shrimp, and crab. Additionally, a variety of flavors, including salty, sweet, sour, and spicy, are combined.

Vietnamese food culture in Northern Vietnam is distinguished by its light, well-balanced flavors, which result from the harmonious blending of numerous components. Vietnamese civilization in general and Vietnamese cuisine, in particular, are thought to have originated in northern Vietnam, which is home to many famous dishes including Pho, Bun Rieu, Bun Thang, Bun Cha, Banh Cuon, etc. Then, with appropriate flavors in each region, the cuisine of Northern Vietnam gained popularity in Central and Southern Vietnam.

Since mountains dominate the geography in Central Vietnam, the region’s cuisine is known for being hot, in contrast to two other regions where the food is primarily mild. The eating culture of Central Vietnam is typified by Hue cuisine. Hue cuisine displays the impact of Vietnamese royal cuisine during the feudal era with its ornate and colorful dishes. Food in the area, such as Bun Bo Hue, Banh bot loc, or Banh Beo, among others, is frequently elegantly garnished and served with chili peppers and shrimp sauces.

Warm weather and good soil are features of Southern Vietnam, which makes it an ideal place to grow a wide range of fruits, vegetables, and cattle. Because of this, fresh herbs, shallots, and garlic are frequently added to the food in the area.

Southerners in particular have a propensity to utilize sugar liberally and frequently add it to practically all of their foods. The Chinese, Indian, French, and Thai cuisines, as well as other Asian and Western cuisines, had a significant effect on Vietnamese cooking.

Aroma, flavor, and color are consistently combined in Vietnamese cuisine. To maintain the “balance” of these traits, they must always guarantee five factors. You must have heard about the five factors that govern Asian thought at some point. They are earth, metal, wood, fire, and water. The cuisine culture in Vietnam is the same.

There are five basic flavors (ngu vi) that pertain to spice: hot, sour, bitter, salty, and sweet. They each stand for one of the five elements: earth, metal, wood, fire, and water. The gall bladder, small and big intestines, the stomach, and the urinary bladder are likewise five organs (ngu tang). Additionally, the daily meals in Vietnam consist of five nutrient groups (ngu chat): protein, fat, water or liquid, powdered minerals, and powder. People are required to create a variety of foods using the five colors (ngu sac) white (metal), green (wood), red (fire), black (water), and yellow (especially in worship meals for Tet or other celebrations) (earth). This five-element connection must be perfectly followed the more significant the meal.

Vietnamese food culture is ever-evolving and learning to become more global. However, the Vietnamese continue to make every effort to uphold the fundamental values and guiding principles that have persisted for thousands of years. Vietnamese food culture, whether sophisticated or straightforward, offers a pleasing mouthfeel for dining delight.